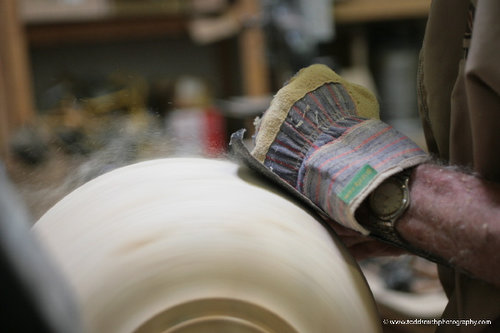 Well begun may be half done but it ain’t over ’til the fat lady sings. For those of you who are younger, many public performances live, on TV and on radio were ended when Kate Smith, who was a bit stout, sang God Bless America. Youth has always been impatient for grown up activities to come to an end and I can just see a father bending over and saying to his son the line about the fat lady singing.

There is a great urge for the new woodworker to skimp on the final steps so that he or she can use and admire their handiwork. It is a natural reaction but one that I don’t recommend. The difference between a well finished piece and a sloppily finished one is profound. Wood is such a beautiful medium. When its surface has been poorly sanded, you cannot see the beauty of the grain pattern and its subtle colors. This is due to the refraction of light by many fibers sticking proud of the wood surface. It is similar to the halo effect when you have a subject backlit by having it between you and the sun. The features become indistinct because each leaf or hair strand or whatever you are trying to photograph bends the light in many different directions and contrast is lost in a fuzzy glow.

With sanding, what you do is scratch the wood. Coarse sandpaper makes big scratches but removes uneven tool marks more quickly. As you progress to finer and finer grits of sandpaper the scratches get finer and finer until you can no longer see them. You remove more and more of the wood fibers that have been abraded so that they are proud of the wood surface. The difference is like looking at a reflection in a still pond or looking at it when there are ripples or even waves on the pond. Now you can see the subtle color and pattern variation that makes wood so attractive. When you then apply a finish to the wood you fill in more of the voids between the wood fibers and get even more of a view of the underlying beauty of the wood. Now its surface is like that still pond and the light is reflected to give a true picture of the grain and color.

Life is a bit like that. The more we refine our skills, the more accurately they reflect nature’s ideal which lies deep within us and which is so familiar and pleasing when fully expressed.

Many find sanding not particularly enjoyable and some of this may be due to not taking proper precautions. My rule of thumb is to wear my dust mask every time I enter my shop. Fine particulate dust, and it is always around even in the cleanest of shops, can go deep into the lungs. It is an irritant and may be a carcinogen. I know many long time woodworkers who have a chronic productive cough and respiratory problems. Allergies to wood dust can also be a problem and the first exposure may be the most important. Thus, as a physician who took care of many patients with chronic lung disease, safety first makes sense to me. I find that if I just have the habit of donning my dust mask first thing and keeping it on the whole time I am in the shop, I never seem to have any problem from exposure to the copious clouds of dust generated by my sanding and use of other power machinery. It’s like putting your seat-belt on when you get in the car. After a while you don’t even think about it.

I had a friend who ran an auto repair shop when I lived in Newport News, Virginia. It was an old fashioned, service oriented operation where you could leave your car and use the old clunker owned by the shop until your car was ready to be picked up, a service I found very valuable. In the shop was a sign on the wall which said: “If you don’t have time to do it right the first time, how will you ever find time to do it over again.

So, in wood finishing, get it right the first time. One thing that is important is to keep striving to use better and better tool technique. The more skilled you are with your sharp tools, the less sanding you will have to do to the surface. This means that your project will go faster. While sanding repairs a rough surface, it takes time and patience. Mastery of tool technique just comes with practice and knowledge. Fortunately today there are so many sources of information for the woodworker that poor technique is really a matter of choice, rather than necessity. In times past you would have to apprentice yourself to a master woodworker and spend years to learn the techniques. Now you can purchase a book, video or DVD or even go on line to the internet to get all the knowledge you can ever need and then some. 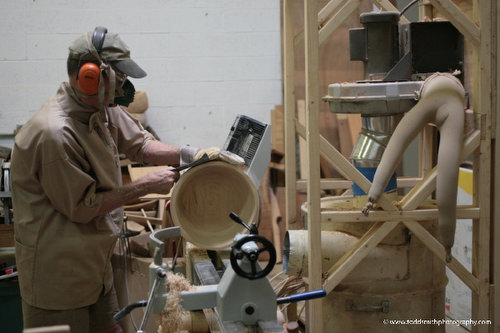 As you progress in your woodworking activities you may want to consider a dust collection system for your shop. Being on a limited budget and tools being very expensive I was a long time getting one. I watched ads in the Penny-saver every week and one day found a used dust collection system for sale. It turned out that it was another doctor who wanted to sell it and he lived just a mile or so from my house. When I went to see it he admitted that he had never used it. Consisting of a 50 gal. drum with the filter inside and a separate impeller in a housing with a two horse power electric motor attached, The 220 volt cord for the motor had an end which did not fit the plugs in my shop. I wasn’t sure that I knew how to get this thing working and indicated some reservation. He was also selling a contractor’s trim saw that caught my attention. I needed one, since my radial arm saw had died on me. When I expressed some interest in the saw, for which he was not asking much money, he said that if I bought the saw he would throw in the dust collection system for free. That clinched the deal.

Now, I do cabinet work, but am not much on carpentry. They are two different skills. However, I had a friend who did general contracting who had been getting me to help him learn to turn wood. I asked his advice and he actually ended up building me a platform for the dust system mounted on casters so the system could be rolled up to different machines in the shop. He would not take anything for his efforts, the real friend that he is.

I mounted the drum and the motor and impeller above it. The wiring was simple and only required a new plug that fit my wall sockets. Now I had to connect the impeller to the drum. The fittings took a seven inch duct. This is a non-standard size as most dust collection hoses are four inches in diameter. One day I was walking through Home Depot and spied a galvanized stove pipe connector which had three joints which could be turned to different angles to simplify fitting one pipe to another even though one was offset from the other. It was all of $7 and much cheaper than any solution I had been able to come up with.

With a little duck tape I was in business except for one thing. The filter bag to catch the fine dust was missing. I called a commercial company, which said it would be happy to make me one for $275. Talking to my contractor friend again, he suggested taping a pair of panty hose to the impeller dust outlet. This is the reason you see the hose adorning my dust collector. It may not be perfect but it works well enough for now.

Just one other safety note. A twenty dollar pair of mickey mouse hearing protectors is a lot cheaper than hearing aids. In Newport New where I practiced medicine the major employer was the shipyard. Steel edges are prepared for welding by use of a chipping hammer. You can imagine the noise of such a hammer on a two story piece of plate steel. Eighty percent of the retirees from that shipyard had permanent hearing impairment. Shop machines are noisy. I want to be able to hear my grandchildren clearly so I always wear ear muffs when exposed to loud noises. We are setting the stage for another generation of the hearing impaired with the use of leaf blowers and lawn mowers without hearing protectors. Do it now and you won’t have to repent in leisure, to paraphrase Socrates.

The point of this is that it is not how much money you throw at something. As a researcher for many years I became convinced that there was an inverse relationship between the research funding and the quality of the ideas it produced. What we are really after is creativity. There is an infinite amount of that in all of us. When we have a technique to harness that creativity, then we can do just about anything.