Once you have turned your hundred ugly bowls you have paid your dues and developed some skill. You know what works and what doesn’t. You can judge what is a safe design and what is not. So off you go making objects of similar form and design.

I had my wares at a Craft Fair the other day and a man stopped to chat with me. He said that all my work looked the same. While I was very aware of the minor differences in my pieces, he was really correct. My designs and executions were predictable. I used classic forms and produced smooth surfaces. I did not take many chances.

Some of this may come from my desire to produce something functional from every good piece of wood I come across. Somehow I feel that wood is a trust and that it is my responsibility to make a useful object that will prolong the life of the wood from the once living tree. It took the tree so long to make the wood.

Recently I was visiting a friend in Lancaster, PA. As we walked to an art show in Long’s Park, we passed an open field used for athletics. I noticed a tree with drooping branches. Most deciduous tree branches don’t droop. It was a very large tree so I walked over to examine it more closely. It was a pear tree. It must have been more than three feet diameter and it was loaded with pears. I was reminded of the saying that it is the tree with the most fruit whose branches bow the lowest. I said I would really love to have some pear wood to work. Ever since reading about pear wood in James Krenov’s books I had been intrigued by the wood. My friend and I continued our walk to the park and I forgot about the incident.

The next week my wife came in after a walk in the neighborhood with a leaf and asked me to identify it. I told her it was a Bradford pear. She said she got it from a limb which had broken from a neighbor’s tree and it appeared to her eye to be large enough to make something from it. I walked over to take a look and agreed with her. I left a note in the mailbox. The next day the neighbor called and said the professionals had already removed the limb as it was blocking the driveway but would I like to have the whole tree that remained.

Bradford pears are well known for their rapid symmetrical growth and white flowers in the spring. They have been favored by landscapers for the past 20 years. Unfortunately, their growth habit makes them subject to shedding large limbs after about 18 years of growth. Some cities are removing them from city streets because of this habit. My neighbor told me that he had six Bradford pears planted in his yard when he moved in 22 years ago. This was the last one remaining and it was beginning to go.

This seems to happen to me so many times. I have a desire for a species of wood and then forget about it. The next thing I know I am blessed with an abundance of it. So now I had a whole tree to play with and did not have to be so darn conservative.

Nature’s attempt to buttress weak forks of a tree makes for spectacular grain patterns when cut at right angles to the pattern. In this case, cutting the log in half by connecting the cut to the middle of the growth centers of the two limbs of the fork will reveal the crotch or flame grain as it is sometimes called. Below is a cherry platter made from such a cut.

On seeing this my wife suggested that I make a set of six of them. To this I replied that it would probably take a set of six cherry trees as this wood is only in the fork of the tree and many of the slices check badly on drying. I never did really understand the feminine desire for sets of matching pieces. 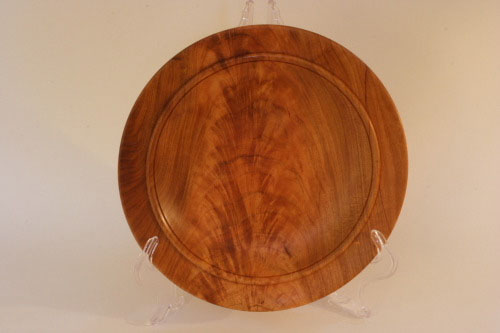 This new found pear wood, however, was not large enough to do with what I did with the cherry. Yet I had a desire to do something different but still capture the wild grain. I looked at one forked log and decided to take some risks. I decided to bore right down into the crotch starting where the limbs parted from the main trunk.

This meant that I had to risk the bottom of the vessel splitting or checking in the drying process as the base would contain the center of growth of the tree. This is wood that is notorious for checking as it dries. Usually you try to eliminate it entirely.

By turning it green before it had a chance to dry, I reasoned, it might reduce the internal stresses enough so that the remaining heart wood in the base of the vessel would not have the force to split the piece.

So, I mounted the log between centers with the main trunk of the log parallel to the bed of the lathe and turned it roughly round and then began to shape the outside.

By turning a tenon or plug on the base end I was able to remove it from between centers and mount it in a scroll chuck on one end with the other end free so that I could make the hollowing cuts.

Making hollow vessels is something I have not been doing very long and find it a bit challenging. This time the process seemed to go fairly smoothly. To judge the thickness of the wall I used a bright light behind the turning and when I could see light transmitted through the wall of the turning as it spun I knew that I was about there. I was a bit surprised that light will penetrate a turning wall that is 1/8th of an inch thick as this is still quite strong in a circular form.

Some of the rim of my hollow vessel was flat where the limbs had been sawn off and some was natural edged wood. How could I make this look like something? After some study when the piece was removed from the lathe I decided to carve some flowing curves to replace the straight sawn lines of parts of the rim. The other parts I left natural so you could see that it was made from a crotch piece of wood.

Being turned thin walled while still green, the wood did not check or the bottom split. I was rewarded in my risk taking with the lovely flame grain pattern on each side of the vessel nearest to the crotch. Some members of my turning club have said that pear wood is boring and seek to enhance it with colored dyes. To my eye the grain pattern is fascinating and needed nothing but some tung oil and wax to give it a light sheen. 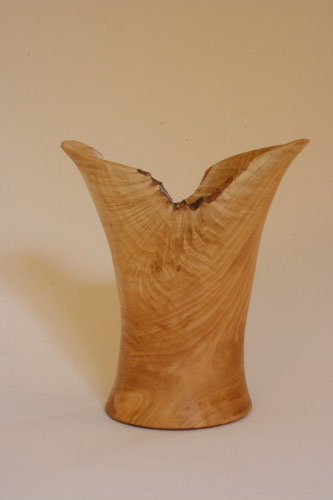