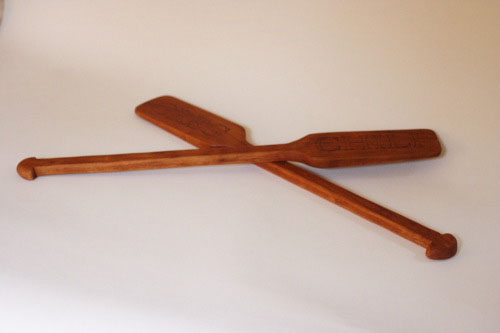 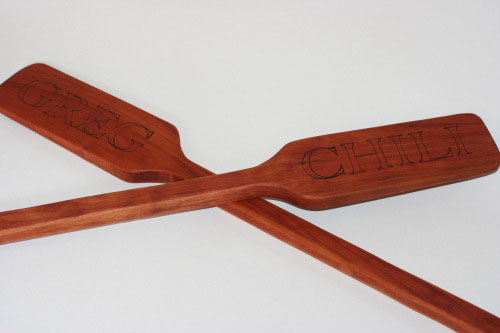 Over the years I have come to think that it is more fun to have someone else tell me what they want rather than to try to guess what the customer may want. So, I welcome commissions. Usually it is a time of growth for me. The project is very likely to entail a design or technique which I have not used before.

A woman came up to my booth at fair one week ago and asked me if I could make a couple of large stirring spatulas. It seems her husband and his friend are involved in chili cooking contests and the chili is cooked in very large stock pots. The usual stirring instruments are not adequate. She was not sure what the dimensions should be but sent me a picture of one in use at a chili contest that appeared in a newspaper. It appeared rather crude to my eye and the word “CHILI” had been cut deeply into the plank with a router. I was concerned with food sticking in the crevices.

So I decided that 24 inches would be a good length. The customer preferred cherry wood and wanted it to be similar to the small spatulas I had for sale at the fair. They are the most popular item that I make.

Having an enlarged area on the end of the handle would help it from sliding down into the deep stock pot, I reasoned. It also broke up the monotonous straight lines of the long handle. She asked me if I could carve the men’s names and the word CHILI on the paddle part of the tool. I allowed as how that would be a lot of work and we might find a cheaper route and she agreed. I also suggested it would be easier to clean. Burning it in with my burning tool that I sign my work with was my suggestion.

After I selected a plank of cherry, it brought back some pleasant memories. There was a wild cherry tree that grew on my father’s farm in Virginia, just out side of Richmond. A storm took it out and I asked my father if he would get our neighbors with a saw mill to cut it up for me. It was one of the last things he did for me as he left us shortly afterwards.

When I wend down to pick up the sawn lumber the neighbor, whose name is Bubba Adams, a large and very kind man, reached down into the pocket of his jeans and produced a long steel nail and a ceramic electric fence resistor. He asked me if I happened to know anything about this.

The blood rushed to my face as I remembered that my father and I had put this up for an electric fence when we first moved to the farm and had horses. Bubba said the saw found it and it took out a few teeth on the big blade. In spite of this he would not take anything for his services. So I loaded it in my station wagon and hauled it home to my shop/garage and let it air dry. Then I moved that wood to Iowa, then to New Mexico and then back to Kentucky and finally to Maryland where I current live and work. The cherry for the chili paddles came from that tree some 28 years later.

Once I had the design for the paddles cut on the band saw and sanded it to a more refined shape I had to decide on how to burn in the letters. I have never had very good penmanship and I am sure I would have never passed mechanical drawing had I ever had the courage to take such a course.

The challenge with the paddles was to make the lettering big enough for the macho men to see without having to don spectacles. I thought of making an outline and then just burning in the space between the outlines. The problem with that is that wood burning tips do not burn evenly. You are prone to get little hills and valleys of different shades of color or blackness.

Then I decided that just burning in the outline would work and the letters could be written large as I wanted. So I went to the computer and selected a font I though looked nice and enlarged it and printed it out. It just fit on the paddle blade. I knew that the ink from my laser printer would transfer with heat and I thought I was all set. Then I realized that if I ironed the letters from the copy they would be in mirror script, a fact that I did not think the macho makers of chili would appreciate.

Not trusting my hand I got my wife to put a carbon paper under the sheet with the letters to trace the outline on to the paddle. It worked fine after we located some old fashioned carbon paper. From there it was a simple task to burn in the outline of the letters as you see from the pictures above.

The woman was very pleased with the paddles which were for a birthday present just a few days later. Don’t know how the men reacted but hopefully they will share in her enthusiasm. If not, at least they can appreciate the thought behind her organizing these unique gifts.