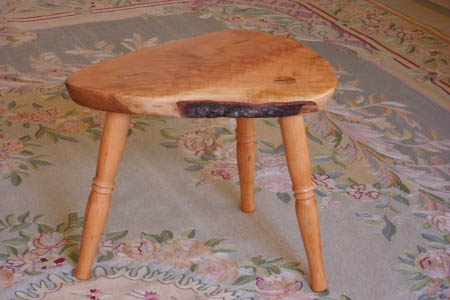 This summer I was clearing out the house where I grew up in order to put it on the market. After 56 years of continuous inhabitation by the Smith family you can guess that it was filled with memorabilia of my past. I found two small stools that I had made in shop in the seventh grade. They weren’t great but I thought they would do as gifts for my small grandchildren. So at my 70th birthday celebration in Vermont this summer I delivered them to my two sets of grandchildren. After a week long celebration the families headed out and we cleaned up. In a bathroom I discovered that one of the stools had been left behind.

My wife appropriated it when we got back home as there were some high cabinets that she could not reach. So I thought I should make her one to replace it when it eventually got back to the proper grandchild. It was a week before Christmas and I had been so busy with Fall shows and filling orders for knit shops for my knitted shawl and sweater clasps that I had not even started on the project

As I was looking at my lumber stack in the shop I found a board that was filled with memories. Shortly before he died in 1980 my father had the boys from the local saw mill come and cut up a cherry tree that had fallen in the wind. When I went to pick up the wood, Bubba Adams, the sawyer, reached into his pocket and produced a steel spike and a ceramic fence post arrestor. He said: “Would you happen to know anything about this.” With much embarrassment I admitted that my father and I had put that on the tree 35 years earlier when we had horses. The horses were long gone and the tree had grown around the spike and we had forgotten all about it.

I thanked him profusely and loaded the wood. He would not take any money for his efforts. So I made a Chippendale mirror for him and his adopted brother out of the wood and I know that they hang proudly in their respective houses.

One of the two inch thick slabs had a dark stain and axe marks where the metal had been chopped out of the wood. I thought at the time that I should make something special out of this wood that would incorporate all the memories it held. So 28 years later, after having moved that wood from Virginia to Iowa, to New Mexico, to Kentucky and finally to Maryland I decided that this would be the next best time.

I wanted to design something better than what I had done in junior high school. The slab was a good 15 inches wide. My planer is only 12 inches. So I decided to do a somewhat rustic design and incorporate some of the natural edge of one side of the board and make a roughly triangular three legged stool with a 15 x 19 inch top. One advantage of a three legged stool is that even if the floor is uneven, and most are, it will sit flat without rocking. 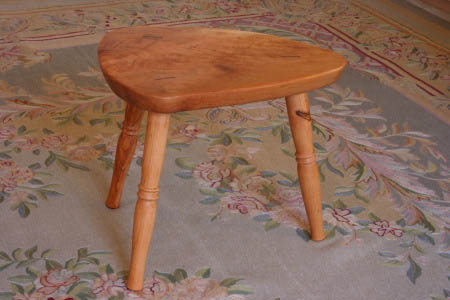 I hand-planed the surface and was rewarded with rich color and interesting grain pattern. There is something deeply satisfying about preparing wood with a hand plane. I cut the shape of the top with my band saw with the table set to cut at an angle. The cut was cleaned up using a spokeshave. Looking at the top, I realized that the refined nature of the wood required a more refined set of legs. Not fancy, mind you, but something more than crude. After looking at pattern books of Windsor chair legs, I took some ideas, simplified them and went to the lathe and produced the legs you see. They were made from one and three quarter inch square stock and fitted into one and a half inch holes bored at an angle into the seat.

To get the same angle for each splayed leg I used a jig two inches thick with an angle cut on two sides and a 1 1/2 inch hole bored inside. It was made for me by my wood turning buddy, Tony Kowalewski, a home contractor. I simply clamped the jig to the top with two C clamps and then used a Forstner bit in a hand drill. The jig ensured that the hole got started at the proper angle and did not skate as I drilled on the slanted, hard, cherry surface.

I carefully crafted wedges to go in the slot sawn in the top of the leg to make it tight in the top. I even carefully drew the orientation of the wedges in my shop working drawing. Wedges need to go at right angles to the grain to avoid splitting the wood with the pressure of the wedge.

So I carefully aligned the wedges. applied wood glue and drove them home. After this point of no return I realized that I had done just the opposite of what I had intended and each wedge was running parallel to the grain. Time will tell if the joints fail due to this error but with a two inch thick wood top, it may take a long time for them to fail. The old saying of “measure twice and cut once” came to mind. In this case it was, “check the set-up carefully before you apply glue and drive home the wedge.” You have to pay attention to every detail at every step of the way. My problem is being in a hurry to see the project finished.

I was able to sneak the stool into my finishing shop in the basement of my home without being spotted by my wife. After the glue had dried I sawed off the portion of the legs and wedges that were sticking out of the top of the seat and finished the job with a brand new orbital sander just taken out of the box for this job. Boy, does power sanding make a difference! In just a few minutes the job was done.

I like to use oil finishes. One problem I have found is that the oil finish soaks into the wood and may take months to dry. Wet oil will make its way to the dry finish and blotch the wax. Some bowls I have had to re-wax and buff as many of six times until the finish was stable.

I read recently that if you use a de-waxed shellac such as Bull’s Eye brand, which comes in an aerosol can, to provide a light coat, and sand it well before you apply the oil, you can seal most of the pores and your surface oil will dry very quickly. I have been using this to great advantage with my bowls and decided to use this on the stool. I did not have the luxury of time, as it was almost Christmas eve. With this technique, and buffing with the Beal buffing system, which I have really come to love, I was rewarded with the finish you see in the picture.

Previous post: What kind of tools do you go for?