I tend to be frugal by nature. Having turned hundreds of bowls I became aware of the huge amount of wood that was converted into wood shavings. It was a big chore just to clean them off the floor after the end of a day’s turning, and disposing of them also becomes an issue.

I had seen ads for devices to core out the center of a bowl to get another bowl blank from the same stock. However, the thing looked rather complicated and there were so many different kinds of tools and systems from which to choose, that I abandoned the idea.

When I had the good fortune to visit my woodturning friend, Dustin Coates, just outside of Hanover, in Etna, New Hampshire, I noticed that he cored the burl bowls that were his specialty. Burls are expensive and little burl bowls are as charming as the larger ones. When I mentioned that I was thinking about learning to core but did not have any idea of how to go about it, he promptly put a piece of wood on the lathe and in a couple of minutes had shaped the outside and cored out the center. He made it really look easy.

He suggested that I use the McNaughton coring system. It requires that you purchase a set of the knives. Further, they come in small, medium and large sizes, with four knives to a set. 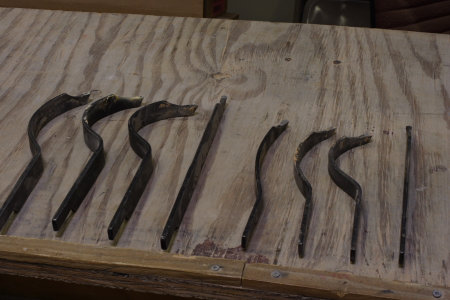 He pointed out that the range of curves in the knives allows much more flexibility in the design of the cored bowl blank. Some systems consist of just one knife with a fixed curvature and so all the bowls come out like a nesting set with rather monotonous design possibilities.

He suggested that the most useful sizes for him were the large and medium set of knives. With this you need to purchase the special tool rest that goes in the banjo. I get my coring tools from either Craft Supplies in Colorado or Packard Woodworks in North Carolina. 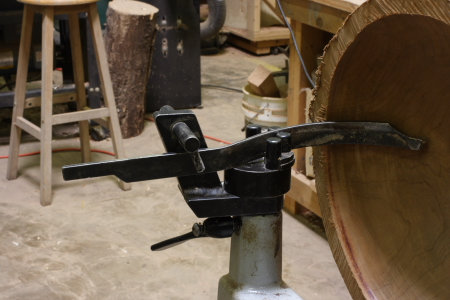 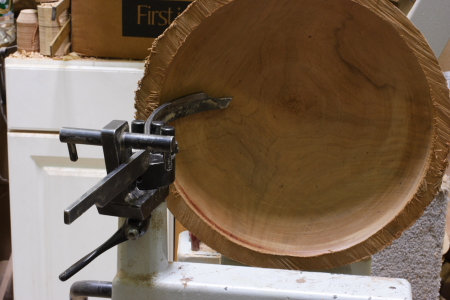 This rest has a steel device that goes over the top of the back end of the knife and keeps it from flipping up and hitting the operator in case of a catch. He also suggested that you did not have to buy the expensive handle but could use a pair of straight jawed vise grip pliers just as well. He actually used the tool without any handle at all. I purchased the vise grips and used them a few times but then found it just as easy to use the tool without a handle. Dustin has always been so generous with his knowledge.

What I have learned is that to keep the system working well, you need to keep the carbide cutters on the point of the knives very sharp. For this I use a set of diamond hones starting with a coarser (600) grit and ending up with progressively finer grits until I find the edge satisfactory.

It takes a lot of force to cut a curved arc through a large piece of wood. It is most important to have the tenon plug in the base of the bowl very securely clamped in the chuck. Any looseness is going to give you vibration and poor results and may cause the blank to fly out of the chuck. Yet with a well turned tenon and securely clamped, it provides no major difficulty. As I enter the wood with the knife I move the knife from side to side just about 1/32 of an inch so that the blade won’t bind. At times it will be necessary to back the knife out to keep the shavings from binding the knife. This is particularly true of green wood.

It takes lots of power to do this operation. I have a 1.5 horsepower motor on my lathe and I find that I can core a bowl more easily if I run the lathe at a faster speed. Run it too fast and it is dangerous. So I start out with a medium speed and, if I am stalling frequently, I slowly increase the speed so that the cutting goes smoothly. If I had a more powerful motor this might not be necessary. Larger bowl blanks will require more force than smaller ones.

It is important to feed the knife into the wood slowly and deliberately. Push it in too fast and you will get a catch. You just feel your way along as you advance the blade. A good place to get a catch is when you first enter the face of the blank. Often the face is not exactly true and so you think you will clear the face when you measure it with the tip of the knife only to find that 180 degrees away the face is much closer to the knife point and a catch results. This is particularly true when turning natural edged bowls where the face of the blank undulates to a very great degree. So put your knife where you think is will clear and, with the lathe off, rotate the blank to be sure that it clears all the way around the face of the blank. Then turn the power on and advance the knife very slowly at first. Once the knife is in the wood for the full 360 degrees, it begins to cut more smoothly. A bad catch can pull the blank out of alignment requiring repositioning. Worse yet it could cause the blank to fly off of the lathe. That can be a dangerous situation.

So, how do you tell how to position the knife in the holder to get the right shape of the cored blank? And how do you keep from going too deep and going through the bottom of the larger piece? Some of this is just trial and error. The angle you take with the knife will determine where it will be at the end. If you go in with the knife pointing towards the axis of rotation of the blank, the cored piece will be shallow and much wood will need to be removed from the larger blank that stays on the lathe. If you go in with the knife parallel to, or even slightly away from, the axis of rotation of the blank, the cut will be deeper and you could risk going through the bottom of the larger blank and hitting the metal chuck that holds it on. With practice you will soon learn the correct angle of entry and how thick to leave the large bowl blank wall. With practice you can leave it thinner and thinner. There can be no hard and fast rules as the design of the larger blank is variable and density of the wood varies with the species. It is not as much of a problem as it may seem. In coring a couple of hundred blanks, I have only gone through the bottom of three blanks.

All right, you have advanced the knife into the wood. How do you know when you are done? One way is to keep advancing the knife to the hilt. Sometimes this causes the cored blank to fly off the lathe at hight speed. A better way is to look down the straight part of the handle. A line drawn from the straight part of the handle will intersect with the tip of the knife. When you see that line pointing towards the center of the blank you know that you are almost done. If you stop the lathe and withdraw the knife and tap the inner cored blank with a hammer or mallet, it often will pop right out.
You can tell if it is ready for this because pressure on the side of the inner blank will result in some movement indicating that the stem that holds it to the larger blank is thin and a good mallet tap will cause it to break right off.

Bingo! Now you have one large bowl still mounted to the lathe and a solid cored bowl blank in the other hand. What I have found is that it is much less labor intensive to core out the center of a bowl than to remove the waste wood with a gouge. Furthermore, you have at least one extra bowl blank and if the blank is large enough, two or even three extra blanks. Whether the wood is green or fully dry, the procedure is still the same. 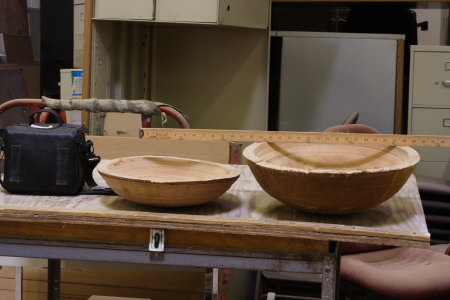 15 inch cored bowl from the center of the 18 inch blank on the right. Yardstick for reference.

Let me pass on some experience that I have learned by trial and error. When you remove the cored blank you have a solid piece of wood without anything that will fit into your chuck. This means you have to mount it between a spur drive center and the tail center to turn a tenon on the base. You may get it properly lined up but you may not. Getting it trued up by turning it true may waste valuable wood. What I have found works best for me is to mount the large blank that you start with and while it is being held in the chuck by the tenon, use a gouge or parting tool to turn a recess with a tenon in the middle of it on the face of the bowl blank. Then core out the blank. The removed core will then accept the jaws of the same chuck which was holding the larger blank. Then when you have finished turning the larger blank you can just put the smaller cored blank in the same chuck and turn a tenon or a dovetail recess to mount the blank in a chuck. Then you can either core a third blank or use a gouge to remove the center waste wood. This way, your extra blank will be aligned properly and will result in less effort and less wasted wood.

You should always be able to get one extra bowl by coring and with skill you can get two or three from the first large blank. It depends on the design and your acquired skill. The advantages of this are obvious. Most anyone would like to get two or three for one. When you add on the advantage of less labor and less waste, it become obvious. Yes, there are extra tools to buy but the extra bowls will soon pay for the cost of them. Finally, you will have the satisfaction of knowing that you have made maximum use of Nature’s precious resources. Life is too precious to waste any part of it.