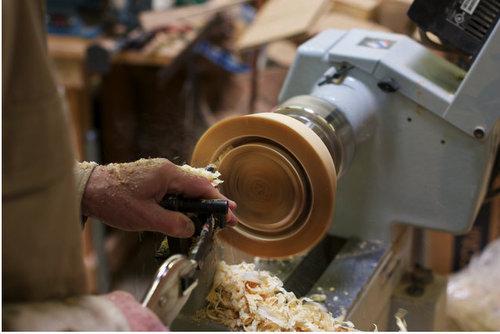 I met a wonderful man in Etna, New Hampshire. He lives just up the road from my daughter and she sent me a newspaper clipping about him. A rugged individualist, he graduated from high school and decided he wanted to turn bowls for a living. He as been doing just that ever since His specialty is turning beautiful burled wood bowls and the newspaper article showed him with a burl so large that it had to be pulled off the pick up truck with a tractor. After reading the article I wanted to visit his shop. He very generously ended up spending the whole afternoon with me and even gave me a lovely log of crotch butternut to take home.

I had been reading about coring bowls for a long time. It seemed a bit complicated and there were several types of tools to choose from. I turn a lot of bowls and this produces a lot of shavings from removing the waste wood from the inside. I know this because I have to bag and carry out these shavings from the shop. My neighbors and friends are just about saturated with free mulch and I put as much on my garden as the earthworms will eat.

So when I visited my New Hampshire turner, whose name is Dustin Coates, I asked his opinion about coring tools and techniques. His reply was to core a bowl on the spot for me to see. It was amazingly simple and looked rather easy. Using this technique one can get two or even three bowls from a single bowl blank. It results in a saving of valuable wood. Often I would lament that I had turned the prettiest part of the wood away in removing the wood that had occupied the cavity of the bowl. If you sell bowls, as I do, then it produces extra income from the same amount of wood. Actually I found it took less energy and less time to core a bowl than to dig all the wood out with a gouge. Last but not least, it dramatically reduces the amount of wood shavings left over after the bowl is completed.

My friend, Dustin, suggested that I get the McNaughton system and which of the many sized and curved cutting tools were most useful to him. He even suggested that a pair of vise grip pliers would substitute well for the more expensive handles and you can see me using his suggestion in the top photo. What I really like about the system I purchased is that you can match the curve of the coring tool to the outside dimension of the largest bowl blank. This gives you more flexibility in determining the most aesthetically pleasing shape of the largest bowl you get from the chunk of wood. Some coring systems I have seen limit you to the same shape which is half of a sphere. This is fine if all you want to do is make a set of nesting bowls but but if you want to create designs with more subtlety and variety you need a system like McNaughton.

It is interesting to me how we are always searching for more. That is just the nature of life. I wanted more bowls, less waste, less work and less shavings and now I have all four. Yet I did not have to sacrifice design considerations to achieve this. How nice it is that at just the right time there is someone more knowledgeable than you who is willing to share what they have learned. It saves you valuable time and energy by preventing you from going down less productive paths. 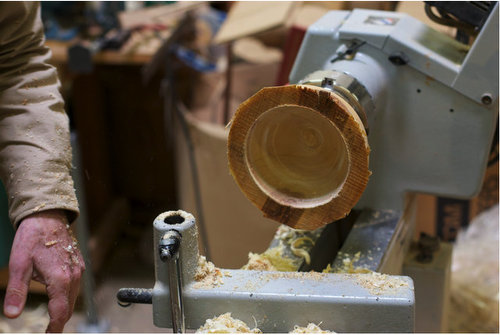