An acquaintance of mine, Jim Oliver, at my Baltimore Area Turners wood turning club mentioned one evening at our show-and-tell that he liked the kind of finish he got with the Beal Buffing system. He passed around a bowl with a very lovely finish like I had not been able to achieve in my wood working products.

I have been seeing ads for this buffing system in woodworking catalogs but never paid too much attention. I tend to be simplistic and a slow learner. An old rag, some paste wax and elbow grease seemed much simpler to use and easier to store than three buffs, a motor and several grades of abrasives plus wax.

However I must admit that birthdays are beginning to catch up with me. My output in the shop is on the rise but my shoulders are beginning to feel the years of hand rubbing and it is not as easy as it once was. I find that as you get older you need to work smarter rather than work harder. So I decided to take a flyer.

I Splurged and Got the Beal Buffing System

My brother-in-law and his family gave me a gift certificate to my favorite local Woodcraft Store and I blew that whole thing on a Beal Buffing System. I got three buffing wheels, a two inch and a four inch set of bowl buffs, some tripoli and white diamond abrasives and a stick of carnauba wax.

I purchased a threaded aluminum piece for the bowl buffs to screw into and then be attached to the drive shaft of an electric motor. If you are like me, you probably have several old motors sitting around your shop and if not, don’t discard ones that come your way. They have lots of uses and the old motors were really built to last.

I found that I used the bowl buffs the most because of the ease of set up and changing buffs. Just unscrew one buff and screw in the next. They are color coded to match the abrasive or wax used on that buff. 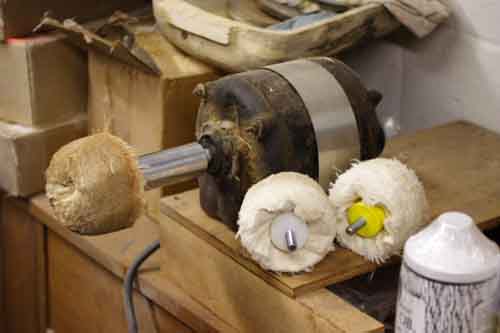 You need a separate buff for each grade of abrasive and one for the wax. You never use the same buff for different abrasives or wax. In the picture below you see the tripoli bar and the bottom, the white diamond bar in the middle and the hard carnauba wax at the top. 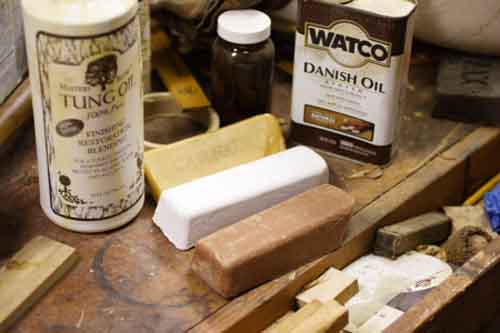 I had some concerns that the dark looking stick of tripoli would discolor the wood. I was used to using this on metal and it made the wheel very black. I guess the black came from metal oxides because I had no problem with discoloration even on this light colored pear hollow turning I show here. 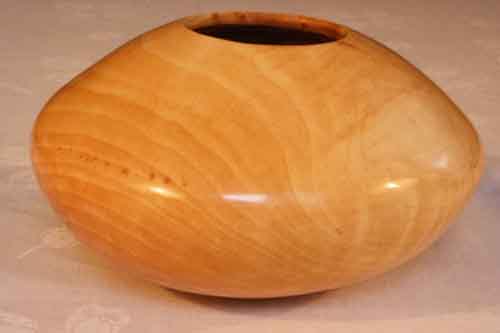 My Old System of Finishing

To back up a bit, I have experimented with a number of wood finishing techniques and have finally settled on what works for me. I use tung oil. It is a drying oil, as opposed to oils that don’t dry, like corn oil or mineral oil. It is the product of a seed and is completely food safe.

That means that I don’t have to worry about toxicity to me as the finisher or to the user of the finished product. I get a completely natural form of tung oil from the Klingspor people. I may dilute it just a bit with mineral spirits for better penetration. However, when I use it on porous woods the finish is rather dull.

The other problem with the penetrating oils like tung oil or linseed oil products like Watco Danish Oil is that end grain sucks up the oil like a sponge. You can see it happen. You coat the wood generously and in a few minutes the end grain looks dry like it had not been oiled.

In turned work, you always have face grain and end grain both to deal with. If I waited a few days and then waxed the vessel it would look great at first. Yet, after a few days the area of the end grain would look dull and dingy. I might repeat waxing several times over several months until this stopped.

I realized when I did this, that the oil on the face grain had polymerized but the large quantity of the oil deep in the end grain was much slower to polymerize and it would ooze out and mar the waxed finish. Heat would accentuate this process.

I made a bowl for someone who had given me the wood. She put it in her lap while we talked. When she looked down at the bowl after some time she noted that there were beads of oil where the warmth of her legs had caused it to expand and flow out to the surface.

There Has Got To Be A Better Way

I read somewhere that if you use a de-waxed shellac that it is compatible with any kind of finish over the top of it. I had always followed the old rule of never mixing different finishing products. Now shellac has been used as a sanding sealer for ages and ages. So I got some Zinsser Bull’s Eye shellac which is guaranteed to be wax free. It was in an aerosol can and very easy to use.

After going through the sanding steps and ending with 400 grit paper I would spray the surface with the shellac and allow it to dry. Then I would sand the surface smooth again with 320 grit paper and end with 400 grit paper. At this point the grain had been pretty well sealed and the surface shellac removed. Then I would rub on the tung oil. This finish looked pretty good to my eye and it would dry in just a few days and the tung oil would not bleed through to the waxed surface. Sealing with shellac prevented the end grain from sucking up the oil finish.

After letting the oil dry for several days I then used my Beal Buffing System. You coat the buff or wheel with tripoli. Each bowl buff is color coded so you won’t use the wrong abrasive. Even buffing with tripoli begins to bring out some of the luster.

Next you change buffs and use the white diamond abrasive. It is much harder and finer than the tripoli. It removes any of the tripoli that may have adhered and shines the wood a bit more. Finally you change buffs to the one for use with carnauba wax. The bar of wax that is provided is hard as a rock and if it were to slip and fall it might shatter. When you shove it against the rotating buff only a very small amount of wax comes off as compared to the relatively soft tripoli. Yet it does not take much of the wax.

The great value of carnauba wax is that it is so hard that it won’t melt with the warmth of your fingerprint. You may have had the experience of handing someone a well waxed and shiny bowl only to get it back after being lovingly handled looking dull and dingy. This is the warmth of the hand melting the softer waxes. Carnauba won’t melt at that temperature and so remains shiny after many hands have touched the waxed surface. That is the good part. The bad part is that it is very hard to buff by hand.

In my youth there was a car polish called Simonize. It contained carnauba wax. I made the mistake of applying it generously to our 1950 black Ford. Even my young muscles could not rub it out. However it was a very durable wax job, and I can remember how the water would bead up on the surface for months when it was used. Most people took their cars to the garage to have a mechanic use a power buffer to buff out the wax.

Judge the Difference For Yourself

So, if you want to enjoy the high gloss and protective qualities of a carnauba wax job you have got to resort to power buffing. Now I make a lot of clasps for knitted shawls and scarves as shown below. When I tried my new system of using sanding sealer and buffing using the Beal Buffing System I was amazed at the difference in the appearance. The surface just seemed more alive. It was almost jewel-like. 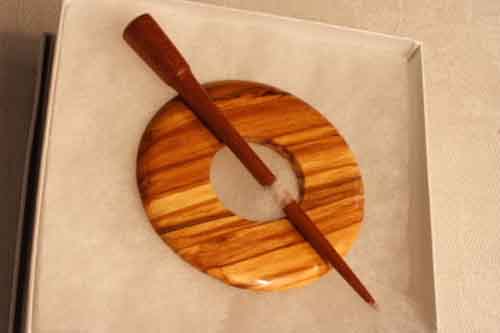 Notice how much less lively the surfaces of the pins are in the picture below. These pins had not had sanding sealer but had been oiled and waxed carefully. There is just no comparison in the finish even though the woods are just as attractive in the grain and color patterns. They just look dull to my eye were before they had looked pretty good to me.

I have read that surveys have been done and it was found that women are more attracted to shiny objects. If two similar objects were presented and one was much more shiny, then women seemed to prefer the shiny one.

Since most of my market is to women I am going to have to test this hypothesis by seeing if the shiny clasps sell better. Stay posted.

Even if you don’t sell your work, I think every craftsman want’s his or her product to look the very best. I know I do and I am sold out on the better finishes I have been getting after using the steps I described above.

Next post: Short on Time? Learn How To Make Friends With Time