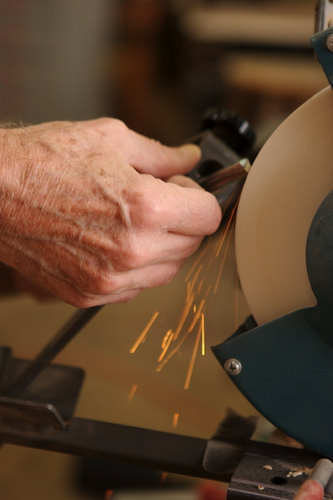 Sharpness, whether of mind or of tool is a very important quality. While I always was interested in knives, whittling, and model building as a youth, my efforts never seemed to head in any particular direction or produce any significant product. At age 37 I happened to learn the Transcendental Meditation technique and things began to change. I became more efficient with my time in my medical practice and was able to do twenty percent more work in much less time. What this did was free up time for me to pursue other fields of interest.

The result was an explosion in my interest and abilities in the field of woodworking. I ended up being to make museum quality reproductions of 18th century antiques after several years of spare time work in my garage/shop. I was able to do this without apprenticeship or long hours of study. I simply picked it up out of books.

What I learned later is that this mental technique enables you to use your whole brain. Our educational system teaches us how to use parts of the brain very well but other unused areas begin to become less functional. The brain is analogous to an old fashioned PBX switchboard with cords that plug into a board to complete a call circuit. If you are not connected to the board, your call cannot go through. Like that all of our one hundred billion neurons are connected to hundreds or even thousands of other cells in the brain. These make a neural pathway. Each time we use that pathway, the stronger it becomes. When we don’t use it at all, the neurons disconnect from each other just like pulling the cord out of the PBX board. So, not using part of your brain over time causes loss of what that part of the brain can do for you. Use it or lose it, is the saying.

So whether it be the practice of a profession or a hobby, you need to use your whole mind. As I began to use more of mine, I was delighted to discover hidden potential in the area of woodworking and it has brought me immense pleasure. Now my woodworking had a direction and a functional and useful product.

Most woodworkers work with wood because they prefer it over metal. Yet working wood involves the use of metal tools and that requires some knowledge of metal. Metallurgy has made tremendous strides in the past several decades. Now it is possible to make gouges for bowl turning which will last three to six times longer before needing sharpening compared to the old high carbon steel tools. HIgh speed steel and powdered metal technology produce very hard steels and this is why they last longer. Yet, due to the hardness, the old methods of sharpening using water stones and other soft sharpening stones will no longer work. The steel is too hard and wears away the stone too quickly. So power grinders and diamond hones are now required.

There is still a place for the old high carbon steel tools, however. The softer the steel, the finer you can draw out the cutting edge before it breaks. Hard steels are brittle and soft ones are more ductile. You may remember the high carbon steel kitchen knife that your grandmother had. It would take such a keen edge but she sharpened it after every use and maybe a time or two during the cutting. So if you need an extremely sharp tool, high carbon steel still fills a need.

Every one wants to plunge right in and do something. A teen ager wants to drive before he knows the rules of the road. A medical intern wants to do the procedure before he knows the indication. Woodworkers are ready for their first cut as soon as the get the tool home. Later they say the tool no longer works and they will have to get another one. I had an old fishing buddy when I was in medical practice. He was a surgeon and money was not a great object to him. He had a lovely boat on which I spent many pleasant hours off of the Virginia and Carolina capes. On board one day I was inspecting his knives and remarked that they were dull. He said he knew it, and had to get some new ones and throw those old ones out. “Why not sharpen these?”, I suggested. He replied that you can never get a sharp edge on them like when they came from the factory. I told him I thought I could sharpen them. He said to not waste my time because I could never get them really sharp.

Now, I had been sharpening knives since I was old enough to carry one and it sounded like a great challenge to me. I brought my grandmother’s old Arkansas stone on the next trip out to sea, and set to work. The edges on these knives were completely rounded over so that when you looked down with the edge pointing towards your eye, the edge was shiny-bright and rounded, the hallmark of a dull edge. It took a while but I was able to produce an edge which would shave hair, the mark of a very sharp knife. My friend was completely amazed as he really believed that you could not restore the factory edge.

So if a tool is made of steel, you can find a way to sharpen it. To do it properly you must know what kind of edge you want . This just takes time and trial and error. The important thing is to start. You will make some mistakes at first but in time you will master the skill. Working with a dull tool takes more force and this can result in injury. It also takes more time and gives inferior surfaces. There are many books on sharpening and many jigs and tools to make the process easier and more foolproof. There are lots of little things you will learn along the way. At the grinder, when small sparks begin to pass over the top of the tool instead of just passing under the tool, then you have reached a sharp edge. I learned that from a book. It makes perfect sense, but I would never have figured this out on my own.

I never had very good luck using a skew chisel. It is one of the hardest turning tools to master. My chisel would dig too deep and leave divots where large chunks of wood had been torn out even though this tool is supposed to produce the smoothest edge possible.

Almost a year ago I joined a local wood turners club in my area. It was a good move on my part because now I was surrounded by people with lots of skills and a desire to openly share knowledge and techniques. One of the functions of our club is to bring nationally known turning experts for a demonstration. The first one I attended focused on using the skew chisel for spindle turning–that is, turning with the grain of the wood running parallel to the bed of the lathe. Chair rungs and tool handles are examples of spindle turnings, as opposed to wooden bowls, which are called face plate turnings. Face plate turnings get their name because they are mounted on the lathe by a faceplate, which fastens to the headstock of the lathe.

The first thing the demonstrator did was to emphasize the importance of having a very sharp skew chisel. He proceeded to show us his diamond hone. Even though the tool had been sharpened on the power grinder, it was not ready for use. He made several passes on the 1200 grit side of the diamond hone and then showed us a piece of soft wood with some dirty marks on it. Actually it was wood to which a fine diamond paste had been applied which was of much finer grit than his hone. He stropped the chisel on the diamond impregnated wood several times. The dirty appearance of the wood was due to steel that had been removed from the skew.

He then showed that the skew would shave the hair on the back of his hand as neatly as a razor. Next he proceeded to turn a flawless spindle reproducing the model he brought with him. It seemed so effortless. I still had my doubts and went up to him after the demonstration and explained my problem. He said it was probably due to my skew not being sharp enough from the grinding wheel. I returned home and acquired the diamond hone and diamond sharpening compounds and went to work on my skew. While I am still not as good as the demonstrator, I am getting much better results than before.

So to be good at this, or any other thing for that matter, sharpen well. Get a technique to sharpen your mind because that influences every thing you do. We all have many skills but if they are covered up by stress, we will never know we had them. In wood turning, get the techniques to make your tools very sharp. The beauty of techniques is that, when used as directed, they work for any one.