In every community in which I have lived, and there have been quite a few, there always seems to be unwanted wood. This can be a real boon for the wood turner. The wood species may be very plentiful such as cherry in Kentucky. Horse farmers felt that the huge cherry trees in the pastures harbored tent caterpillars which made the colts sick. So they cut down huge cherry trees and left them in the fields. In Albuquerque, which is high desert, wind would take out trees that had been planted and the cut wood was just left at curbside to be hauled to the dump. In Maryland the power company would clear right of ways and just leave all kinds of hard woods for the taking. Storms everywhere take down large trees in city lots and disposing of the wood is a headache for the owner.

Here in Vermont, where I currently reside, the same rule applies. Dutch elm disease was first reported in the US in 1928. It is caused by an invasive beetle that may have started in Asia and spread to Europe from where it made it to the US in infected lumber. Every where I look here in Chittenden County there are dead elm trees. Some are small but others are more than 12 inches in diameter. When they are finally taken down they have been standing dead for several seasons. No one seems to want them. Elm has interlocking grain that makes it hard to split. Early settlers did not like elm because of its peculiar odor. So there the trees stand.

My first experience with elm was in Albuquerque, New Mexico. Siberian (or “Chinese”) elms were widely planted in the city as they grew rapidly and provided shade. Someone gave me some logs. The wood was not very attractive to my eye and it was very hard to split. It did not take a good finish.

So, when my mother-in-law in Shelburne, Vermont asked me to take down some dead elms from her yard, I did not think I wanted any of the wood. When the time came, however, I could not resist salvaging a log or two. It was attractively spalted, was very hard and turned well and accepted a nice finish, much better than the finish I could achieve on Siberian elm.

When I noticed some dead elms across the street from where I live, I asked if I could have some wood when they took it down. I showed them a bowl from the previous elm bowl I had made and they were interested. One Saturday this summer I hear a chain saw and followed the sound. The neighbor was taking down his dead elm. He not only let me have all the wood I wanted but brought it over to my shop. The rest went to the dump.

Below are examples of the finished products. 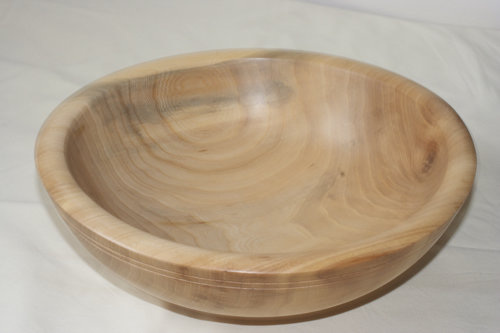 I find the color and grain pattern in this bowl to be interesting and attractive. The diffuse gray spalting adds additional interest. 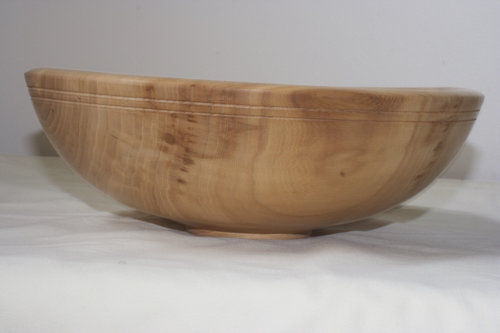 This is a side view of the above bowl. 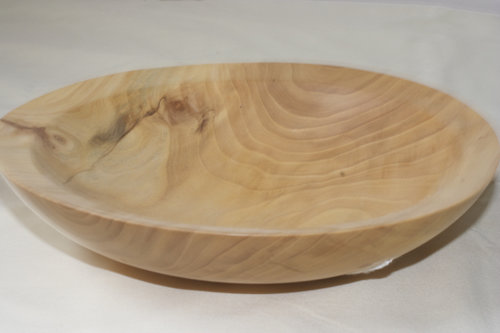 Here is the small bowl from my mother-in-law’s tree. The spallting, both linear and diffuse in the upper left side adds visual interest to the piece. 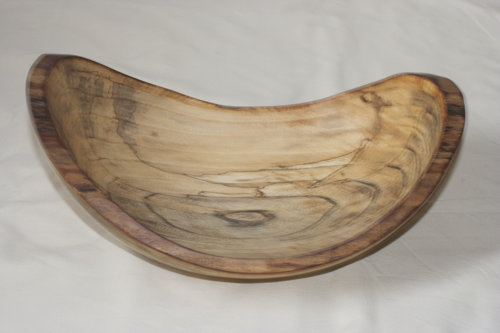 Here is a natural edge bowl from a spalted dead elm from down in the lower end of Addison Counthy. It was just going to sit there until it disintegrated as no one had interest in the wood. The spalting followed the annual rings and gives a visually appealing pattern.

So, if you just want to stick to what the wood merchants sell, you will be missing some very interesting and attractive wood which is free for the asking. Unwanted wood is a headache to the property owner but a boon to the turner. If you give a bowl in return you make a fast friend.