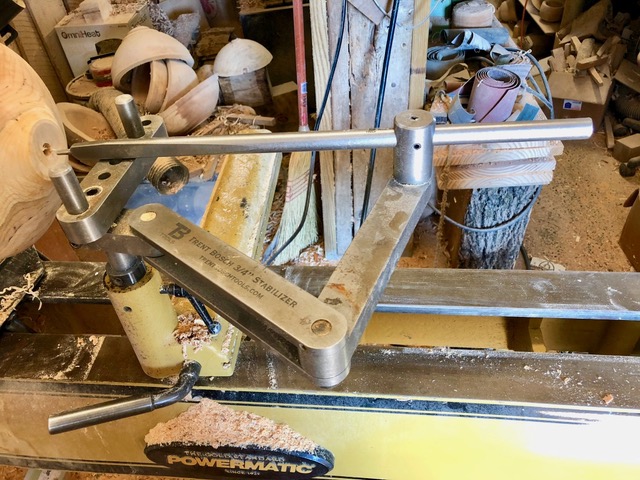 I started hollow turning years ago mostly using tools developed by David Ellsworth, a pioneer in turning wood turning into an art form.  His tools are quite simple and can be made by anyone.  They are basically steel drill rod shafts with a cutter in the end.  One is straight for opening a hole all the way to the bottom.  The second is the same set up with the cutter mounted at a 45 degree angle so that you can cut out a curved  side without hitting the rim of your vessel.  David suggested that you have long handles and that they be left rough so that they can be gripped more firmly.

Over the years I have come to understand that instruction.  A cutter mounted at a 45 degree angle and sitting proud of the center of the shaft develops a great deal of torque which takes considerable strength to resist.  Also the cutting may be uneven resulting from the tool bouncing in and out of the cut. In short, a long session of hollow turning beats you up.  The deeper the vessel the greater the strain.

I have a superb turner in my Woodchuck Turners of Northern Vermont club named Tom Dunne.  His designs and craftsmanship just take your breath away. I asked his opinion about hollowing tools and he told me that the ones he uses are no longer made but said that others had found the Trent Bosch Stabilizer good.  After doing some research on Bosch’s web site I decided to give it a try.

The stabilizer is a very heavy piece of articulating steel and a heavy tool rest.  A tool is inserted in the end of the articulating arm and the tool just glides over the rest which supports it when the spinning wood forces the tool down on the rest.  When it is not actively cutting the tool just glides one or 2 millimeters above the rest so you have a very good sense of feel of your tool.  In the picture above you see the straight cutter attached at the end of the articulating arm and the forward end on the tool on the rest.  It also comes with a handle which I do not use unless making a very deep vessel.  There are two set screws that need to be adjusted every time you switch tools and the handle has two more.  As you have to switch tools not infrequently I found it simpler not to attach the handle.  One less step to have to deal with.  So switching tools is more time consuming than using tools which are not attached.  However, that is minor.

Notice how heavy the tool is. I opted to get the 3/4 inch set of tools as I wanted to do larger turnings.  Tools are also available in smaller and larger diameters. Notice also how sturdy the articulating arm is.  Further the cutting tool is firmly attached so it cannot twist.  Now the device takes all the torque from cutting and not your hands.  This is huge if you do lots of hollow forms.

Note also that the tool rest has many holes and that steel pins are in two of the holes.  Any hole configuration can be used with the tool.  This is also a huge advantage.  When hollowing with an unsupported tool it is very easy for you to get the tool against the opposite side of the  rim of your vessel and lateral pressure of the tool against the rim will crack the rim.  Just ask  me how I know.  With these pins you can bring your tool to rest against them and then use leverage to push the cutter into the wood.  This results in uniform cutting and greatly reduces the tendency to chatter.  You cut faster with less effort.  This also is huge.

The picture above shows the different shaped cutters, scrapers, the handle and the tools that come with them.  Just to the right of the yellow handle is the curved cutter.  It is at about a 45 degree angle from the line of the straight shaft.  This is used to remove wood from the sides that the straight cutter cannot reach.  There is another curved cutter with an even greater angle for undercutting the rim of more severely curved vessels.  I have not purchased that yet but may in the future.  Next to the curved cutter is a curved scraper.  People always want to look inside your hollow form and if they see ragged and uneven contours they are disappointed.  The scraper makes the inside presentable. It also helps you to get the final thinness of the wall with less fear of going in with too deep a cut as the broader cutting surface is less likely to dig in.

Next to the curved scraper is a straight scraper.  Finishing the bottom of a hollow turning is a challenge to get even.  The straight scraper makes that job ever so more easy, and I am glad that I went ahead and purchased it.  Next are the set of set screw wrenches supplied.  The one with the horizontal red handle is very handy.  This is the one that is used the most and its more ergonomic shape saves hand fatigue.  Also in the picture is a cherry hollow turning just taken off the lathe.  I have turned about 10 vessels with the tool and am amazed at how much easier it is on the body and how much better my final results are.

The tools are not cheap.  The set shown here cost a bit over $800 with shipping.  A set of Ellsworth tools would be under $100 but would not include scrapers.  Having to loosen and tighten two set screws took a bit of getting used to when I change tools but the ease and stability gained make this a small price to pay.  Things have to be rigid to be stable. With use, the tool rest has to be adjusted from time to time when the cutting tool begins to bind on the tool rest. This is accomplished using the largest of the set screw wrenches and making the desired adjustment in the height of the tool rest.  That wrench is the largest of the three in the picture.  All in all I am very satisfied with my new hollowing tools. I have not compared it with other systems on the market but am unlikely to do so as this one has fulfilled my current needs.

Next post: Securing a Lid in Turned Hollow Forms